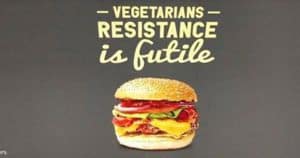 Before I start, I want to apologize in advance to my vegan friends.  This article is gonna tick you off, but then again why should I care.    If you want, I will invite you over for a steak.

Vegans and animal advocates love to say many of the following statements.  “Meat is murder.”  “Vegans are saving the planet.”  “Meat is a biohazard.”  “Murdered animals are not fashion.”  “Animal agriculture is the leading cause of global warming, deforestation, species extinction, water depletion, ocean dead zones.”

Many vegans believe they are more socially responsible, but to me, they are just uninformed and hypocritical.  They like to gloat that red-meat causes heart disease and cancer and that pigs and cows cause greenhouse gases thus worsening global warming. They claim that their actions are not only more humane but also better for the environment.  As the blood begins to boil for vegan readers, give me a few minutes to explain where I am going.  Then again, this article is not aimed at you.

For the vegans, who are clearly upset with my writing, I know you believe you are enlightened and the center of social justice.  I am sorry to burst the bubble.   You, clearly, do not have the cognitive depth and emotional 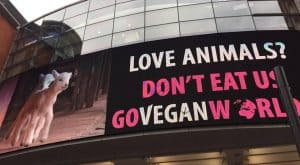 stability to see the valid points I am making.  For you, I recommend you have a few bites of red meat, get a B12 shot, and see a professional to work on your emotional imbalance.  You are looking a little pale and might need the iron.

I have to stop and wonder if any of these statements are true or could be scientifically proven.  Before you start to think that I am anti-vegan I want you to know that I am not.  I understand why some people choose either vegan or vegetarian lifestyles.  I have been known to say that my meat has to come from the “magic meat factory” where no real animals are involved.  If I had to slaughter the animals to eat, I would be vegetarian or vegan.

What if everyone in the world became vegetarian?  How would that change things?  Would it affect deforestation or water depletion?  If we all stopped eating meat, we would have to increase the number of plant crops that are grown to feed all the people.  Would that decrease deforestation and water depletion or actually make it worse?

What would happen to all the animals we currently produce for food?  Do we just set the chickens, pigs, and cows free?  We have bred the ability of these animals to fend for themselves out of them.  For the chickens, humanely killing them for food is a lot better than being a meal for a predator. 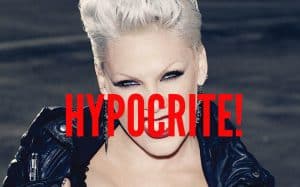 In researching this article, I found multiple pictures from vegan rallies that give me pause.  Not because I disagree with what they are saying but more about what they are wearing.  If you are going to tell me that “meat is murder” or “murdered animals are not fashioned” you should not show up to the protest wearing leather boots or sandals.  Also to all the famous actors and models that are “vegan” perhaps you should reconsider wearing makeup, dyeing your hair, or using hair products since many brands are (still) tested on animals.

The problem with vegans who make these claims is they have flawed reasoning.  I have one friend who loved to tout his veganism as he walks around with his wallet, belt, and sandals, all of which are made of leather.  I know they make the sandals vegan now.  I have no idea what that means since you can’t eat them.

Next, let’s debunk the global warming myth.  They claim that raising cows and pigs causes an increase in greenhouse gasses and global warming.  Let’s face the facts that there is limited proof that humans not eating meat will prevent this one.  Only if we killed all those cows and pigs would we make a difference in methane and carbon dioxide production from the animals we use for meat.  So, what if we turn them all loose.  No proof this will work either.  The largest cause of global warming is the depletion of trees.  The most important thing we could do to prevent global warming is to stop cutting down trees to have more farmland.  Even better, we could convert all of these vegetable farms into forests. 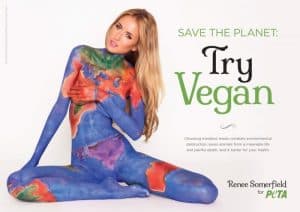 Renee Somerfield: Save the Earth

So, let’s look at the humane treatment of animals.  Vegans claim we should not eat animals, birds, or fish because killing them for food is inhumane.  We are omnivores and are meant to eat meat.  Deer in many areas of the United States overpopulate and are a danger to drivers.  Deer have limited, natural non-human predators outside of wolves.  Every winter, millions of deer starve are mauled by wolves, or freeze to death.  Hunters kill them for food and decrease the competition for food, so a higher percentage live to see spring and less suffer looking for scarce winter foods. I personally would take a bullet over starvation, mauling, or freezing to death.

Lastly, vegans love to drink almond, coconut, rice, and soy milk.  The production of which takes lots of plants to produce.  These plants require extensive irrigation and pesticides.  The pesticides kill bees and birds.  The problem is that vegans, in general, are too close-minded to see how destructive their own habits are to the environment.  Organic foods are probably better for you but who knows how destructive these are for the environment because they take more acres to produce, so we have to cut down more trees.

The bottom line: Many vegans have flawed reasoning, and some are just plain hypocrites.  One deer or cow can feed many humans whereas it takes acre of most vegetables to deliver the same level of nutrition. This article is meant as humor to some extent and also to invoke thought.  I am not saying that we should eat all the meat we want.  Limiting red meat and sticking to leaner cuts are good ideas.  Vegan should step off their soapbox and enjoy their veggies, but they should stop trying to convert the world to their religion.   For more on vegetarian and vegan diets and the link to depression: Research: Vegetarian diets may increase depression in men.  I also wrote on the myth that vegetarian diets help with weight loss.

Editorial: Cut back on your cell phone and lose weight

Editorial: No diet is superior!

Myth: If You Exercise, You Don’t Need to Worry About What you eat.

Be the first to comment on "Editorial: The Hypocritical Philosophy of Veganism"