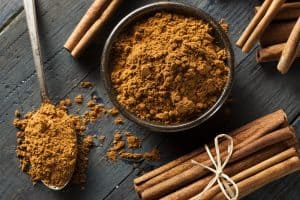 I recently read a blog post by a dietician who was slamming cinnamon and the medical and scientific community that has touted its benefits for weight loss.  The self-proclaimed “expert” suggested that readers put on their BS detectors in the first paragraph.  This statement is pretty telling that he is not approaching the topic with any semblance of openmindedness.   It is a textbook case of bias.  So what are the facts?

I have researched the topic for articles, and I have personally taken cinnamon.  I have found that when I consume it that I have more energy, eat less, and seem to lose more weight.  Is this a placebo effect, I have no idea.  Then again, I don’t care because it works for me.  I did not just base this on personal experience.  I have based it on some research also.

Numerous weight loss before journal publications has suggested that cinnamon might help with weight loss.  These are research articles in journals and not just an article in a muscle fitness magazine that is selling you a product or a random blog and forum posts blindly publicizes the next flavor on the month supplement.  Sure, there is a lot of wacky stuff out there, but cinnamon is not one of them.

So let’s look at the evidence:

I have found at least eleven research articles that show promise with cinnamon intake on improved body composition or fat loss.  These are serious journals and not weight loss articles in a throwaway muscle magazine, forum, or blog (ouch, kind of hurts since this is a blog).  I am not blindly yelling the benefits of cinnamon supplementation to sell a product.  None of these journal publications is making an outlandish claim that you will lose 10s to 100s of pounds, but they do show a subtle benefit that is none-the-less significant.  This subtle change may be the difference between failure and success for many of us.

The bottom line: Cinnamon may help you lose weight.  If not, cinnamon tastes great, and the taste alone may increase your satiety with less food intake.  One thing I do agree with the writer is that it will not supercharge your metabolism, but every little bit helps.

Myth: Once I lose weight I can eat whatever I want.

Research: Energy Density May Play a Part in Weight Loss

Be the first to comment on "Editorial: The truth about cinnamon and weight loss."