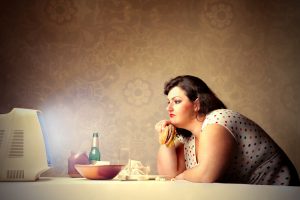 Weight gain and obesity have reached alarming levels.  Obesity is a massive epidemic worldwide.  Every year more and more of us are succumbing to the evil grasps of the animal that will eventually contribute to the early death of many Americans.  I am always looking for research that indicates what I can change to lower my risk of falling back into those old habits or maybe even what those old habits are.   I recently found a study that showed that showed that meal skipping helped with weight loss.  That only makes sense as long as you do not add a whole portion to the meal that precedes or follows it.  One thing that has been tied to obesity is later eating habits.

Americans continue to live a busier and busier lifestyle that offers less time for rest and meals.  I have found that I am coming home later and later from the office and spending less time resting and exercising.  Our meals are often mindless and eaten on the go.  I have heard that eating at a later clock hour is a newly described risk factor for adverse metabolic health.  Experts have given the advice to not eat after a certain hour, yet, how eating at a later circadian time influences body composition is unknown.

A recent study from 2017 looked at this issue[1].  Although many studies have looked at this particular question most looked at the time of day such as eating after 5 pm, and this does not account for rotating shifts or differences in sleep times.  This study was published in the American Journal of Nutrition and it examined the relations between the timing of food consumption relative to clock hour and endogenous circadian time, the content of food intake, and body composition.  The researchers enrolled 110 participants, aged 18-22 years of age, in a 30-d cross-sectional study to document sleep and circadian behaviors within their regular daily routines.

They used a time-stamped-picture mobile phone application to record all food intake across seven consecutive days during a participant’s regular daily routines and assessed their body composition and timing of melatonin release during an in-laboratory assessment.

The study found that individuals who of higher body fat consumed most of their calories 1.1 hours closer to melatonin onset (sleep) than did lean individuals.  The timing of food intake relative to melatonin onset was significantly associated with the percentage of body fat and body mass index whereas no relations were found between the clock hour of food intake, caloric amount, meal macronutrient composition, activity or exercise level, or sleep duration and either of these body composition measures.  This finding means that it is not the time you eat but the time you eat in relation to your bed time.

The bottom line:  I recommend that you try to eat two hours before bed and avoid foods after that.  You will be leaner and have less reflux disease.   Clearly, more research is needed, but this might highlight another potential factor in the cause of obesity.