Beer does not cause a beer belly. 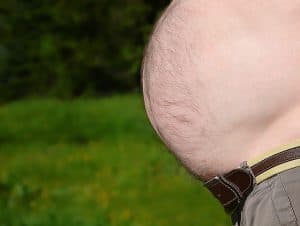 I have often joked that I have six pack abdominal that is covered by a 12 pack of fat.  Drinking beer has long been associated with an increase in body fat and particularly fat around the belly. This condition is even commonly referred affectionately to as a “beer belly.” Does beer cause abdominal obesity?  It has been blamed for many a gut.  There is a good correlation because men drink more beer and men have more beer guts, so it must be true.  Right?  Wrong.

If you have a little beer belly, you are not alone.  It would seem that men around the globe who drink beer have begun developing that little pot belly and this incidence only get larger with age.  The fact is that not all beer drinkers get them and some of the heaviest drinkers never get them.  I have seen alcoholics with little to no beer belly, and they pound the beer.

Beer is a drink made from grain, such as barley, corn, malts, oats, rice, rye, or wheat, that has been fermented with yeast[1].  This fermentation process produces alcohol.  The flavor is attained by adding a mixture of herbs, spices, and fruit.  Although the alcohol content differs from beer to beer, it is a unique mixture of grains and flavoring that makes each beer different.

Beer in a mug

Beer also contains small amounts of micronutrients such magnesium, potassium, and sodium, but I would not use this as a reason to drink more because beer is not a good source of these nutrients.  For example, beer contains about 20 mg magnesium per 12 ounces beer.  You would have to drink 15-20 beers to get your RDA requirement of 350-400mg per day.

So what really causes us to develop a beer belly?

Beer is not the cause of abdominal obesity, but the calories from it can contribute.  Think about it this way: metabolic syndrome or syndrome X is associated with abdominal obesity.  A beer belly is abdominal obesity, so a beer belly is nothing more than a sign of insulin resistance.  It is excess calories lead to the deposition of fat along the waist, but in particular, it is carbohydrate and sugar calories that add inches to our waistline.  So, it is not beer necessarily, and sugary soda pop, pastries, or candy are just as likely if not more likely to cause the pudgy waistline.

Why does it matter?

So you like beer and do not want to stop drinking it.  I am not telling you to quit, but if you are angry at the thought, you may want to reconsider.  I am saying to choose wisely.  The abdominal obesity that we have incorrectly associated with driving beer but may be exacerbated by high calories from beer is associated with a higher risk of diabetes, heart disease, and death.

The bottom line: Drinking beer is not the cause of a “beer belly, but it can cause weight gain.  Beer can be high in calories from alcohol and carbohydrates. The higher the intake, the higher the risk of weight gain and obesity.  Stick to moderation and add a healthy lifestyle and you will lower your risk of the “beer belly.”

Be the first to comment on "Myth: Beer causes abdominal obesity"