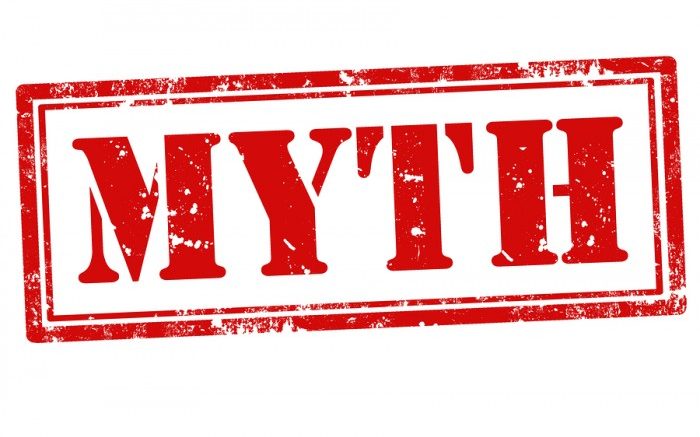 Rice: Should I avoid it? 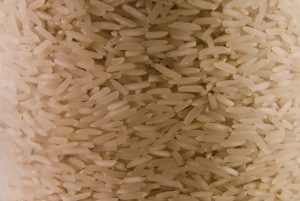 Rice is a grain and is one of the most consumed foods in the world.  It is cheap and very dense in both calories and carbohydrates.  Since as long as I can remember, it is has been tied to obesity and chronic diseases such as diabetes.  The question is whether this link is warranted and is rice overly vilified?

The calories from rice are primarily from simple carbohydrates that are readily absorbed.  There is no doubt that rice lacks diversity of macronutrients since it obviously is not a major source of fat or protein.  In fact, white rice lacks fiber and is not a demonstrated source of vitamins nor minerals.

Does rice cause obesity?  Facts being facts, the countries with highest rice intake per capita and percentage of their average diet, tend to have the lowest obesity rates.  The problem is that it is not that simple since there is a genetic difference in metabolism that is more common in certain regions and ethnicities.

What is rice?  Rice is a grain.  Whole grains are what you want to have in your diet so how does white rice compare to a whole grain and what is the equivalent of whole grain in rice?  Whole grains have three components which are bran, germ, and endosperm.  Whole grain rice is brown rice.  White rice is just the endosperm.  Removing the bran and germ reduces the nutritional value of rice by removing fat, protein, and fiber.  The removal makes the grain faster cooking and have a softer texture. 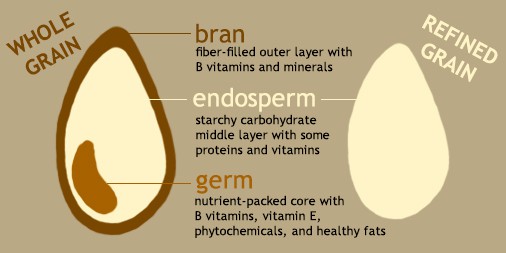 Whole Grain versus Non-Whole Grain.  This image is from Harvard University[1].

Does rice cause weight loss or gain?  Brown rice has been well studied, and its effects on weight are well established, but white rice’s research creates a picture that is a lot fuzzier. 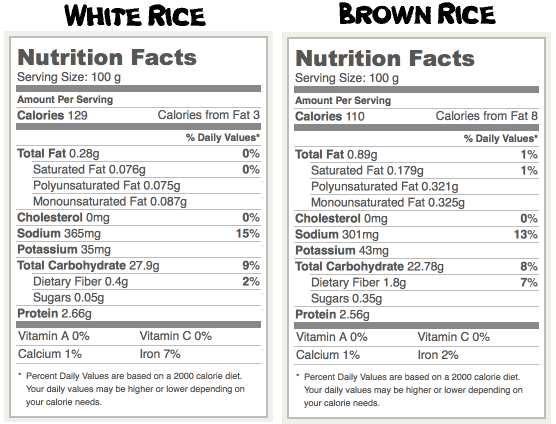 White rice has research that points to both weight loss and weight gain in those that consume it, so the results are, to say the least, inconsistent.  Some studies point to refined grains such as rice as a cause of obesity and weight gain [2],[3],[4].  Some studies also have not found a link between white rice consumption central obesity [5],[6].  Lastly, white rice consumption has even been linked to a reduced risk of weight gain and may even protect against obesity[7],[8],[9]. These studies clearly conflict with one another.

The problem with most of the studies is that the diets are different from country to country.  In the United States, meat is plentiful and cheap.  We tend to not only eat more rice but also more meat.  In other countries, meat is more expensive and less abundant. Therefore, the public in those countries is less likely to over consume both meat and rice.

Brown Rice is higher in fiber and is absorbed slowly from our digestive tracts.  There are plenty of studies that show this that eat diets that are higher whole grains like brown rice has been shown to be associated with a lower weight that those that eat diets lower in whole grain less who don’t [10],[11],[12],[13].  The fiber content causes less of an insulin spike and keeps you full longer.  This feeling of fullness results in a  reduced number of calories consumed[14].  Many of the research articles I found by searching PubMed and in reading an article on Authority Nutrition[15].

The Bottom Line:  Rice causing obesity is a myth.  Almost every food will induce weight gain if consumed in excessive amounts.  As with all foods, portion control is vital to avoid weight gain.  There is nothing especially fattening about rice, but of the two types of rice, white rice is higher in calories and lower in nutrients.  I would recommend that you stick to higher nutrient forms of rice such as brown rice.  You will get more nutrients, fiber, vitamins, and minerals from the whole grain.

Research: Many Commercial Weight Loss Programs Too Good to Be True

Research: Coffee in moderation is not harmful to your heart.

Be the first to comment on "Myth: Rice Will Make Me Fat"