Doing Crunches will not give you a six-pack, but walking your butt off will. 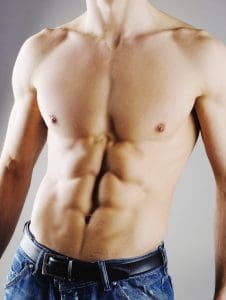 Many people want to lose fat from one specific area of their body.  How many guys or gals do I see in the gym who are overtraining a particular area.  Examples are you might want a six-pack of abs so you over-train your midsection or as a woman, you might want those perfect hips, so you start doing exercises to get rid of hip dips.  I am here to tell that this is a bunch of malarkey.

The thought behind spot reduction is that you exercise a set of muscles and the fat will be reduced or lost in that area.  For example, crunches will drop stomach fat. While spot reduction might seem like common logic, the real life facts are the opposite.  There is a lot of truth behind the statement that a 6-pack of abdominal muscles are made in the kitchen.  Fat loss is 70-80% from diet and not exercise.

Fat is simply a location to store excess energy for a period of drought or period with less food.  When food is consumed, you digest the food and use it for energy and body maintenance processes.  If you eat calories in excess of what you need, the extra energy will be transformed and stored as subcutaneous fat. This process is reversed by a calorie deficit.  During a deficit, fat is released, and these calories are metabolized into fuel for use by muscles.  Since working out makes your body use up calories, any exercise or reduction in calorie intake will help you drop the pounds by forcing your body to metabolize fat for energy.

Sure crunches will burn calories and will help you lose weight and burn calories, but there are far better methods to burn fat.  The type of exercise you do has little to with where the fat calories are mobilized so don’t expect it to spot reduce fat based on what exercise you do.  It just does not work like that.

This myth was created largely by companies trying to sell you the next best exercise device.  Instead of falling for their trap, just walk off the pounds!  Any exercise will work.  Better yet, instead of exercising, eat lighter.

Ok, want proof?  One study looked at this and found that regional training goes not result in a regional fat loss[1].  Instead, it resulted in a global fat loss.  I know you are saying that you did 1,000 sit-ups a day and you got a six-pack of abdominals.  I am happy for you, but the fact is that one person does not indicate a scientific study.  If it took you 2 hours to do 1,000 sits-ups a day, you would have gotten the six-pack quicker by running for an hour per day.

The bottom line: Be leery of any program that claims that you can spot reduce, sculpt, tone, or trim a particular body part with a single device or exercise.  It just will not happen.

Be the first to comment on "Myth: Spot Reducing"