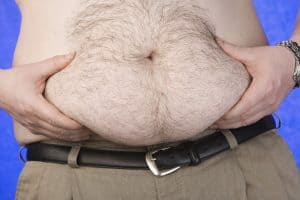 Recent research studies have looked at the data from the Framingham Heart Study (FHS) and the relationship in the data between body weight and stroke.  News articles have misinterpreted the data and conclusions and I have received questions from patients ask me if it better to heavier when it comes to having a stroke after hearing the stories.

The most recent study was by Hugo Aparicio et al and was published in the Journal of the American Heart Association[1].  This study is an observational study that looked at all-cause mortality in participants to of the FHS.   The study reviewed a 10-year period and looked at survival rates of various different BMI categories.  The researchers found that overweight and mildly obese patients had a lower rate of survival from a stroke than those who were of a normal.  If you notice, both groups had a stroke so the study did not look at the risk of having a stroke.  They concluded that there may be an “unknown protective factors associated with a moderately increased body weight before stroke”.

The problem is that many other studies including one from 2010 in Stroke by Pasquale Strazzullo[2] et al have found that obesity and being overweight increase your risk of suffering a stroke.  This study found that this risk was increased the risk of a stroke by 22% and 64% in overweight and obese subjects.

The Bottom Line: I will acknowledge that if you have a stroke that being mildly overweight may provide some increased survival overall, but that is not the same as saying it is a good idea to be overweight if you are at an increased risk to have an ischemic stroke.  Obesity and being overweight is a risk factor for stroke and is associated with higher overall mortality in the population because a higher number of the overweight and obese will ultimately suffer a stroke.   The idea of using increased body weight on prognosis after stroke will remain a controversial topic until further studies are completed to better evaluate this question.

Research: Eating breakfast is not good for weight loss

Be the first to comment on "Recent Research on Obesity, Overweight, and Stroke"