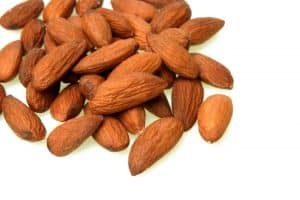 I wrote about the benefits of walnut consumption to assist with weight loss and reduced satiety.  It is amazing that nuts have so many health benefits when consumed in moderation.  I have written on the benefits of peanut butter in “Peanut Butter: Can I eat it and lose weight?“, walnuts in “Research: Walnut consumption may assist with weight loss” and nuts in general in “Weight Loss Tips: Go Nuts.”  This post is just one more article on the weight loss benefits of nuts and was initiated by an article I read on ScienceDaily that look at Almonds as the “right snack”[1].

There has been a lot of research on almonds[2].  They definitely have a benefit to reduce your risk of heart disease and make a positive impact on your cholesterol levels.  The inclusion of almonds in a low-calorie diet has been reported both to enhance or to have no effect on weight loss in prior studies.  These studies specifically look at the effects of almonds on visceral body fat stores and satiety during a weight loss diet which has not been widely examined prior to these studies, but several recent studies have looked at just this question.

The first study entitled “A mid-morning snack of almonds generates satiety and appropriate adjustment of subsequent food intake in healthy women” was published in 2015 in the European Journal of Nutrition.  The purpose of the study was 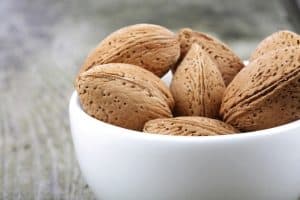 allowed to eat lunch and dinner as desired.  The effect of the almond snacks on satiety was assessed by measuring energy intake in calories eaten during lunch and dinner and subjective appetite ratings throughout the test days.  Almonds resulted in an i

The second study entitled “Almond Consumption during Energy Restriction Lowers Truncal Fat and Blood Pressure in Compliant Overweight or Obese Adults” was published in 2016 in the Journal of Nutrition[3].  The study evaluated the effects of consuming almonds as part of an energy-restricted diet on body composition, specifically visceral adipose tissue (VAT) and BP, compared to a nut-free energy-restricted diet.  The study is a randomized controlled 12-wk clinical trial of 86 healthy adults.  Participants were randomly assigned to 1 of 2 energy-restricted diets with a 500 calorie deficit per day.  The two diets were either an almond-enriched diet or a nut-free diet.  The data indicated a greater mean reduction in truncal fat, total body fat, diastolic BP, and a greater tendency for VAT loss over time in the almond enhance diet group than the control group.

The bottom line:  Almonds are a healthy snack.  Moderate almond consumption during lower calorie diet can result in greater proportional reductions of truncal and total body fat, higher levels of satiety, and lower diastolic BP.  More studies are needed but this is one more reason to eat almonds daily.

Be the first to comment on "Research: Almonds may help with weight loss"