Cumin may help with weight loss. 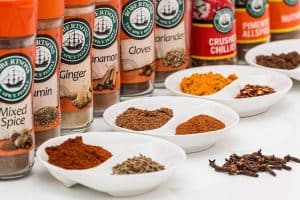 Cumin is a common spice that often in Asian, African, Indian, Mexican, and Latin American foods.   Without it, Tex-Mex foods such as chili would not be the same.  It is a rather spicy herb that scientifically known as Cuminum cyminum, and it belongs to the family Apiaceae.  Because cumin has a strong flavor and smell, it only takes a small amount to have a huge flavor.

Cumin is packed with nutrition.  One tablespoon of this flavorful spice has only 22 calories with 1.3 grams of fat, 2.6 grams of carbohydrates, and 1.1 grams of protein.  The best part is it has 0.6 grams of fiber and is rich in potassium with 107 milligrams. All that flavor and it is not bad for you.  What else can you ask for?

Research indicates that cumin may help you lose weight.  A study completed in 2015 that looked at overweight adults and the effects of cumin[1].  This double-blind placebo trial compared cumin to a prescription drug called Xenical or Orlistat.  After eight weeks, the researchers found that cumin was equivalent to the prescription drug.  Both the cumin and Orlistat groups lost an average of 2.3 pounds in 8 weeks.  Not only did it help with weight, but it also had a positive effect by reducing blood glucose.

Another study of 88 overweight women found that yogurt with 3 grams of cumin added promoted weight loss when compared to those given yogurt without cumin.  Subjects of the cumin group experienced a significant decrease in weight, BMI, waist circumference, and fat mass[2].  In fact, the test group lost nearly 1.5 Kgs or 3 pounds more with cumin than the control did without.

Similar results were found in the following studies also[3],[4].  Multiple other studies have shown that cumin provided a significant change in weight.

The bottom line: All of these studies showed that cumin helps with fat/weight loss.  It is not a major bullet, but if you like its flavor, add it to your diet.  I prefer to use cumin in recipes, but I guess you could take it in pill form, but where is fun in that.

Question: Can I lose the weight cause by my depression medication?

Be the first to comment on "Research: Cumin and Weight Loss"