As if you ahem not figured from the title of my blog.  Honestly, it is just common sense that walking or other forms of moderate exercise will help with weight loss.  As an advocate for walking for fitness, I am always looking for pieces of research to back up my theory.  Today, I found one such publication.

It has long been believed that increased physical activity helps with weight loss, but it is also acknowledged that exercise only accounts for 80 percent or less of weight loss.  That being said, it can still have a significant effect on over all weight loss and maintenance, so ignoring it can have an equal but adverse effect.  In other words, exercise is still important.

The study of the question was published in the August 2017 copy of the Journal of Nutrition[1].  The study was a simple 12-week study that investigated the effects of an energy-restricted diet with and without moderate walking on body weight, body composition, resting energy expenditure, and endocrine and cardiometabolic risk variables in overweight and obese participants.  It truly is an ambitious study.

Participants were randomized and placed into two randomized arms.  They were put on an energy-restricted of 500-800 calories per day.  This dietary intervention study was conducted in 82 men and women. Participants were divided into two groups or arms. Both groups were placed on the same hypoenergetic or reduced calorie diet, but the second group participated in a regular walking program of 2.5 h/wk which equates to 30 minutes of walking per day. 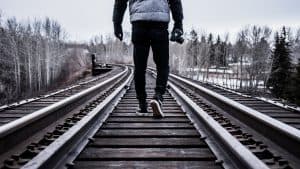 Participation in a 12-week weight-loss study resulted in significant reductions in body weight and fat mass and was associated with significant improvements in biomarkers for cardiovascular disease risk.  Additional moderate walking enhanced the effects of a reduced calorie diet on fat loss and serum insulin.  It makes sense that this same exercise would reduce insulin resistance and help increase the effects of a diet.

Walking is such a simple and lower level of exertion that most people think that it could not make possible help with weight loss.  As a moderate pace, you can walk 2 miles in a half hour.  That pace will burn 90 calories in 15 minutes or 180 in 30 minutes.  If you perform that pace five days a week, you will burn 900 calories a week.  That minuscule change along with no dietary changes will add 1 pound of weight loss in 3.8 weeks or 13.4 pounds per year.

The bottom line: Walking at a moderate pace can help lose and maintain fat loss.  As little as 30 minutes a day can help you lose or prevent the loss of up to 13.4 pounds a year.  Small changes can truly make a difference.

Research: People would rather take a pill than exercise.

Be the first to comment on "Research: Walking Helps Weight Loss When You Are Dieting"