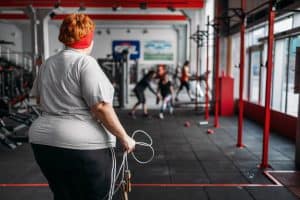 A fat sweaty woman in the gym.

Obesity is a scourge on modern society.  It is one of the top causes of lost work productivity and premature death and disability.  Over 1/3 of the population of the United States is obese.  Obesity is associated with health problems such as increased risk for coronary diabetes type 2, heart disease, cancer, gallstones, and hypertension.  Obesity is also associated with an increased risk of death from nearly all causes, and in particular, it is one of the leading cause of death among adults younger than 65 years.  On 18 September 2018, the United States Preventative Services Task Force (USPSTF) recommended the addition of behavioral interventions for the treatment of obesity.  In fact, they recommended that primary care physicians choose behavioral interventions before choosing a medical treatment.  This decision was not based on a whim, but on an extensive review of the evidence.  The US Preventive Services Task Force (USPSTF) is a group that makes treatment recommendations about the effectiveness of specific disease treatments for patients.

Based on the release, published in the Journal of the American Medical Association (JAMA),  and evidence, multi-component behavioral interventions lead to clinically significant weight loss with little risk of harm.  Unfortunately the same is not true for pharmaceuticals.  Pharmacotherapy or medications do result in clinically significant weight loss, but the evidence pointed to a higher risk of harm appeared to be greater, the task force said in the document, published in JAMA[1].  The guideline recommends providers offer it to all patients with a BMI over 30.  The researchers excluded surgical treatment because they felt it was outside the scope of primary care.  I would argue that they should have included it.

The bottom line: A behavioral intervention for obesity is moderately effective and creates low to no risk of harm.  Because of lower risk of harm, the USPSTF recommends that clinicians offer obese adults intensive, multicomponent behavioral interventions.  Although they did not make a recommendation on surgical treatment, I feel that it only makes sense to use surgery only as a last resort because the risk of harm is higher for surgery than the other two treatments.  That being said, surgery may also be some patients only The task force did not review evidence on surgical interventions because they were considered to be “outside the scope of the primary care setting.”

Be the first to comment on "Research: Behavioral Health Interventions Recommended In Obesity"