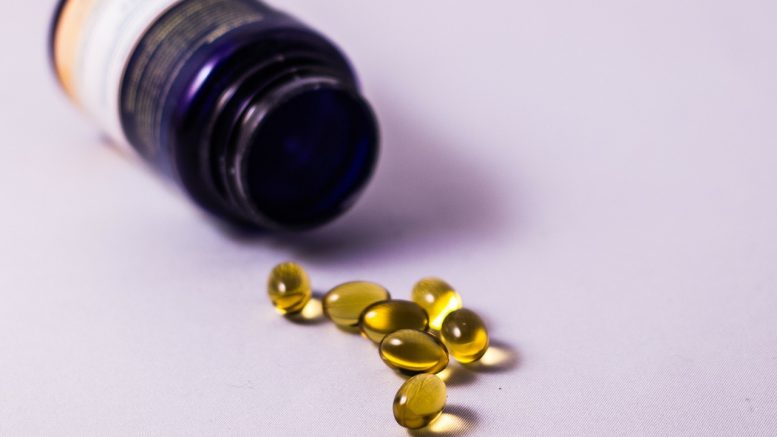 Orlistat is a pharmaceutical drug, sold over-the-counter under the name Alli, and under prescription as Xenical.  It has been on the market since 1999.  In 2007, it was released for over-the-counter sales under the name Alli.  The difference between the two pills, Alli and Xenical, is dosage.  Alli is 60 mg per pill and Xenical is 120 mg per pill. 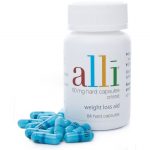 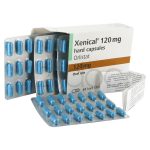 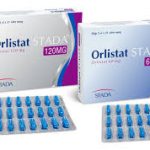 How does it work?  Orlistat was developed to treat obesity but it was not meant to treat obesity without acompanying exercise and diet changes.   Orlistat is mean to be taken with  low-fat, lower calorie diet.  The drug is a lipase inhibitor.  Lipase is the enzyme released by the pancreas  into the small intestine to digest fats and allow you to absorb them for energy.  Simply put, the pill works by reducing the breakdown of fat in the gut, and thus allowing  fewer calories from fat to be absorbed.     By preventing the action of lipase, the medication allows fats just pass out of colon undigested.  Orlistat taken with each meal, prevents the absorption of all the fat from the food into the body. 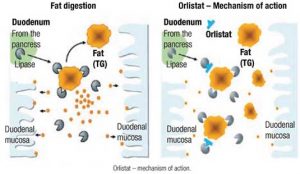 Side effects:  I am sure you know the most common side effect or at least you can figure it out.  The most common side effects of Orlistat come from the increased fat in the colonic excretions.  The increase in bowel fats causes gas (aka flatulence), oily bowel movements and other bowel-related changes. The worst of the symptoms is stool leakage.  Imagine a pair of white pants in church and you thought it was just gas.

There is a black box warning for Orlistat from 2010 because it can cause severe liver damage.  You must be on the look out for jaundice (yellow coloring of skin and eyes), itching, loss of appetite, and brown urine or yellow stools.  Reports of severe liver damage in about a dozen people who used orlistat prompted a new warning label in 2010, though the FDA could not confirm that the drug caused the damage. People who take the drug should watch for signs of liver malfunction such as yellow skin or eyes, itching, loss of appetite, brown urine or yellowish stool. 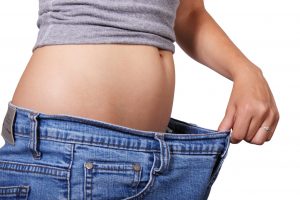 Does it work?  Yes.  There are plenty of studies that show it works.  A review by Drew showed that Orlistat increased weight loss by about 3% compared to without it[6].  If a 5% weight loss is required to impact health, then 3% is clinically significant addition to normal diet an exercise in this those that are obese.  A reduction of 5-10 pound has been shown to reduce your risk of high blood pressure, diabetes type 2, and heart disease.  There are plenty of studies that show Orlistat helps lower these risks.  On study showed that 1 Kg of body weight lost reduced a patients diabetes type 2 risk by 16%[7].  The same study showed a reduction in all cause mortality with intentional weight loss.

Side effects: This is the big reason to avoid this medication.  This drug has gastrointestinal side effects to include but not limited to loose, oily stools, flatulence, and frequent, foul smelling bowel movements that you may be unable to control. This is all caused by the increased fat composition of the stools.  This reduction fat absorption may also cause a reduction is absorption of fat-soluble vitamins, such as vitamins A, D, E and K and thus a deficiency in them.

Recommendation:  Discuss this with a provider before you try this OTC or prescription medication.  This is not a medication for a quick weight loss for a prom, company function, or social event.  I usually insist that patients see a trainer and dietician.  You must be on  a low-fat diet while taking Orlistat to minimize the abdominal side effects.  I would carefully consider the alternative.  The side effects are embarrassing enough to force you to become a hermit in the woods so I would not take this unless it is your last option.

Be the first to comment on "Supplement: Alli Diet Pills"