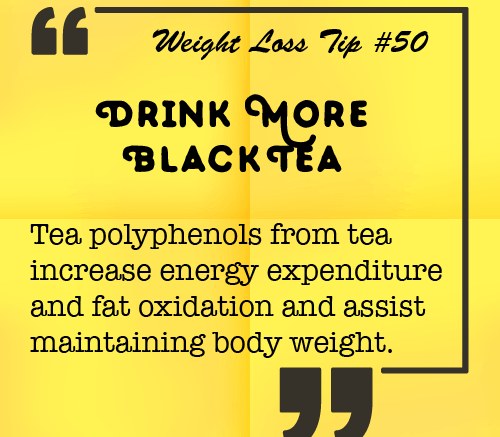 Black tea is a staple of the European diet, and it may help you lose weight. 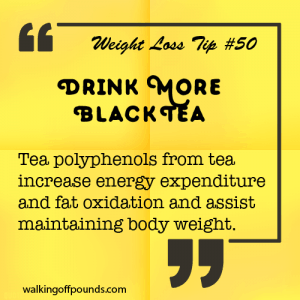 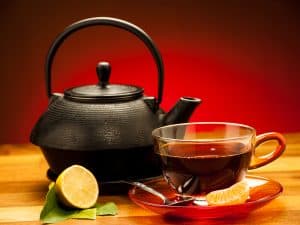 A cup of black tea

Over 80% of all tea consumed in Europe is black tea.  I have already written an article on green tea.  This article is my first one on black tea alone.  When people think about weight loss and appetite, they focus on green tea, but it is obvious that black tea is also a healthy addition to your diet.  It is full of antioxidants, and it helps crank up your metabolism.  In green tea, compounds called catechins rev up or increase your metabolism and make you not only release more calories in the form of fat from fat cells, but it also speeds up the bodies fat burning.  Are there compounds in black tea that do the same?

I am going to start by reviewing the different types of tea.  All tea comes from comes from the same Camellia sinensis plant, an evergreen bush indigenous to both China and Indi, but they differ in the way they are processed.  White tea is picked at a younger age withered and dried but not fired.  Black tea is a fully aged tea that is both withered and oxidized.  Green tea is allowed to only slightly wither, and then it is fired to prevent oxidation.  The unique ways teas are processed changes the chemical composition of the biologically active compounds.  Based on my readings, only green tea and black tea are linked to weight loss, but the others are less studied.  To be honest, most of the studies I found focused on green tea and epigallocatechin gallate (EGCG). 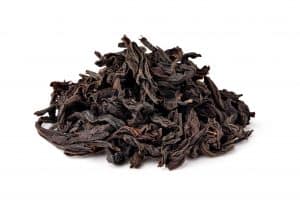 The primary bioactive compounds found in black tea are theaflavins and thearubigins.  These compounds are responsible for many of its health benefits.  The research appears to show that black tea has the potential to increase weight loss.  One study from 2005, confirms that black tea will decrease body fat[1].  In the study, catechin intake decreased body fat. These results suggest that catechins contribute to the prevention of and improvement in various lifestyle-related diseases, particularly obesity.  These findings also suggest that tea has influenced the accumulation of body fat.

One study from 2011 published in Nutrition looked at black tea and caffeine supplementation in rats[2].  The study was completed over 12 weeks, and rats were given the equivalent of 500-1000 mg of black tea extract per kilogram body weight per day.  The study showed a significant decrease in blood triglycerides and body fat stores.  The December 2013 issue of the American Journal of Clinical Nutrition features another metanalysis.  The addition of black tea resulted in improved anthropometric variables such as BW, BMI, body fat mass, and waist to hip ratio[3].

The bottom line: Tea polyphenols from tea increase energy expenditure and fat oxidation, providing benefits for achieving and maintaining an ideal body weight.  I recommend adding tea to your dietary intake as long as you can avoid adding sugar.