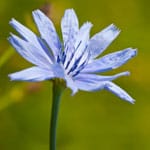 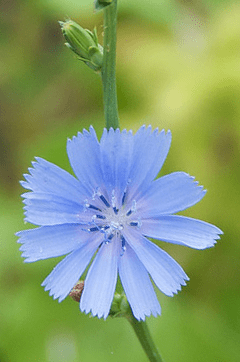 Chicory or Cichorium intybus, grows in the United States and is cultivated in Mediterranean areas in Europe.  Chicory is a somewhat woody, perennial herbaceous plant of the dandelion family, usually with bright blue flowers but they can also be white or pink.  It is basically a common weed that has been naturalized in various areas of the world.  Chicory root is roasted, ground, and used as a coffee substitute, especially in New Orleans, in particular because it has a similar taste.  Chicory is caffeine free and is cheaper that coffee.   During World War II and the Great Depression when shipping from coffee-producing countries was disrupted and coffee became too much of a luxury due to cost, chicory was used in the United States to produce “coffee.”  Chicory also has been added to certain European beers and ales. 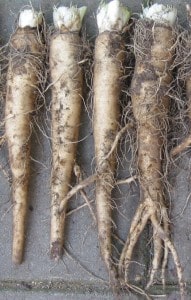 It might trigger reactions in people who are allergic to ragweed pollen and are sensitive to related plants, including chrysanthemums, marigolds, daisies and other members of the Asteraceae/Compositae plant family. Because chicory can stimulate the production of bile and contraction of the gall bladder, consuming it can cause gall bladder symptoms in those that have gall bladder disease or stones.  I personally have never seen this in a patient, but it is possible. 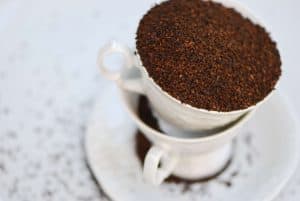 Chicory, when eaten, doesn’t produce a rise blood sugar.   Chicory root contains inulin which is a carbohydrate fiber that is less absorbable. Sometimes called “chicory root fiber,” inulin is also found in bananas, wheat, onions, and garlic, but chicory root has very high concentrations. Food manufacturers now extract inulin from chicory root and add it to edible products such as yogurt, ice cream, chocolate bars, breakfast bars, salad dressings and margarine. Because it has a smooth and creamy texture, it has been called the “stealth fiber,” and it also works well as a replacement for fat. Like other high-fiber foods, inulin prevents constipation, helps maintain a healthy balance of “good” bacteria in the colon, and helps lower cholesterol levels. It can also be used as a sweetener in processed foods but its sweetening power is one-tenth that of sucrose so it takes more to create the same level of sweetness. 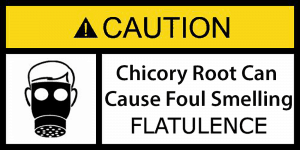 Chicory root makes you toot.  The only problem with inulin may be that it doesn’t have the texture or taste of fiber. It is often added to cookies and bars as a means to add fiber and sweetness without calories.  The texture hides the fact that it is high in fiber.  This makes it easy to consume too much and brings on the same kind of digestive problems caused by an excess of any fiber such as gas/bloating, nausea, flatulence, stomach cramping, diarrhea, constipation and digestive “rumbling.”  Ten grams of native inulin and five grams of “sweet” inulin are probably safe.  Flatulence was the most common symptom hence it earns the toot nickname.  I can’t help remembering a flight from the Middle East in which a traveler ate a whole box of chicory root containing cereal bars by herself and asked me why she had such discomfort.  Stick to one bar a day and you will avoid her discomfort followed by embarrassment as the noxious odor filled the cabin of the aircraft.  Because of the gas and bloating, I recommend watching how much you eat.  Do it for those around you or you may be standing alone.

Be the first to comment on "Nutrition: What is Chicory Root or Inulin?"