A daily serving of walnuts may help shed extra pounds. 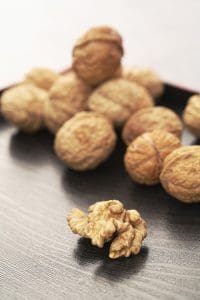 Walnuts are readily available year-round in just about every grocery store on the planet.   They are a delicious source of protein and healthy fats.  Walnuts are well documented to be high in antioxidants and helpful in lowering your “bad” cholesterol.  The key is walnuts are high in monounsaturated fats which are the “good fats” found in foods like almonds, avocados, peanuts, and olive oil.  Foods rich in monounsaturated fats are found in the Mediterranean diet which researchers have long lauded as significantly decreasing the risk of heart disease and improve blood cholesterol.  In addition to health benefits, walnuts also appear to be an important tool in helping you lose weight.

Obesity is a huge epidemic worldwide and weight loss often seems like an impossible challenge.  Some of us find it unattainable while others seem to see the pounds fly off with ease.  If there is anything that could help you find a higher degree of success without endangering your health we would all want to know about.  Research from 2017 shows that walnuts might be one of these foods.

Forty-six percent of the world’s walnuts are grown in China.  Walnuts are not a single nut but a family of tree nuts.  There are several different types of walnut trees but the three most often processed and consumed are the black walnut, English walnut, and the white walnut or butternut.  The English walnut is the most common variety consumed in the United States.  The popularity of the English Walnut is because it has a thinner shell that’s easily cracked and it has a milder flavor than the pungent black walnut or white walnut varieties.    Butternut trees or white walnut trees produce a rich, oily,  and delicious nut.   Black walnuts have a bolder, earthier flavor. So what does the research show?  A study entitled “Effects of Diet Composition and Insulin Resistance Status on Plasma Lipid Levels in a Weight Loss Intervention in Women” was published in the Journal of the American Heart Association in 2016[1].  The primary focus of the study was to look at different diet compositions on lipids and weight loss.  The study included a group of 245 female subjects that were obese.  The subjects included in the study were randomized and placed in one of three study groups.  The three groups were placed on a diet that was either a lower fat, higher carbohydrate diet; a lower carbohydrate, higher fat diet; or a walnut-rich, higher fat, lower carbohydrate diet.  Blood samples and data were taken and analyzed the 213 women at baseline and six months.  The subjects that were placed on the walnut-rich diet had a significant increase in their high-density lipoproteins and a significant decrease in their will density lipoproteins.   At the end of 6 months, the walnut group lost more weight.  The weight loss results were confirmed by another study in 2017[2].

Ok, so the weight loss is better on walnuts, but do walnuts stick with you and keep you full.  A new study from 2017 looked at this very question.  The study, “Walnut consumption increases activation of the insula to highly desirable food cues: A randomized, double-blind, placebo-controlled, cross-over fMRI study,” was published in Diabetes, Obesity, and Metabolism[3].   The focus of the study was to work it walnuts and how they affect satiety.  The study included ten subjects who were fed walnuts and then received a fMRI.  Walnut consumption decreased feelings of hunger and appetite and activated the portion of the brain associated with highly desirable food cues.

The bottom line:  Walnuts appear to assist with weight loss by keeping you full longer.  They also have a beneficial effect on your blood lipids.  You can use them in cooking, baking, salads, and as a snack.  I recommend adding them to your diet several times per week.

Be the first to comment on "Research: Walnuts can help with weight loss"